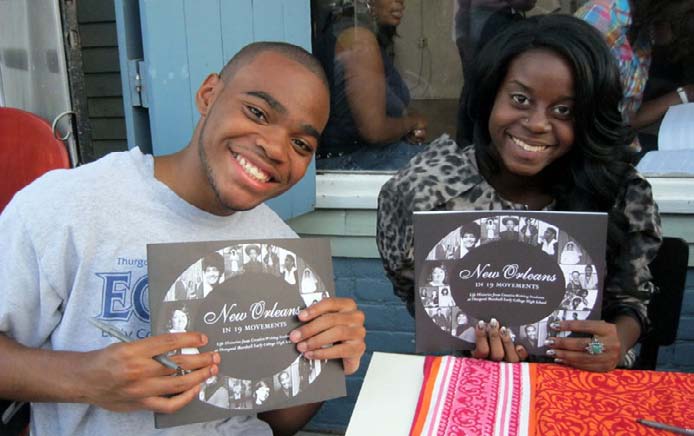 In 2003 a shooting at John McDonogh High School (JMHS) in New Orleans left one teen dead and several others injured. A reporter for the local newspaper interviewed two local students and the resulting story “twisted our words around,” as one of the girls later said, making it sound as if they disliked the people involved in the shooting. The two girls’ mothers feared for their safety and pulled them out of school for the remainder of the year. That prompted two teachers, Rachel Breunlin and Abram Himelstein, to do something better.

“Our stories, told by us.” That’s the slogan of the Neighborhood Story Project (NSP), which the two founded in 2004 and now codirect. The organization works with JMHS students to produce high-quality books of stories, interviews, and photographs about the places where they live and the people who populate them. The group has since expanded its practice of “collaborative ethnography” outside the schools and has produced other books, posters, and other publications that tell stories about New Orleans culture and life— workers at the local racetrack, or the Nine Times Social Aid and Pleasure Club, for example. Block parties are held to celebrate the release of each book or set of books, which have become citywide best sellers.

“What we do is part education, part citizen journalism, part civic dialogue—and all about justice,” says Himelstein. The organization’s curriculum first has students read books that place them on a continuum of citizen journalists. Then students are trained in writing, editing, interviewing, and photography and in “defining their own struggles,” which Himelstein says is the stuff of all great literature.

“People are at work on
creating and moving their
own narratives forward,
and hopefully creating
lives of beauty and
interest. Their time and
energy is fundamentally
meaningful, and their
ownership of stories is
at the crux of where that
conversation should be.”
—Abram Himelstein

Ownership of one’s story is more than just academic for Himelstein. He self-published a novel at age 28, having been inspired by the “chutzpah” of his great-grandfather, who had published his own poetry and autobiography upon emigrating to the United States. NSP authors get royalties on their books (over $60,000 in royalties paid out to date), and some get speaking fees. “They’re now seen as experts, and not just sources,” Himelstein says.

That’s a basic issue of media justice for Himelstein. “The people we work with have a fraught relationship with the media. Middle-class reporters go into poor neighborhoods and tell stories about them, and don’t pay, and in fact use those stories to sell advertising and subscriptions. The more incendiary the stories, the more profitable the enterprise. We do the opposite: People tell their own stories, and tell them correctly, and get paid for it.”

“The books help change New Orleans’ conversation about itself,” he continues, estimating that about 10 percent of the city’s homes have at least one of the books. And the authors themselves, though few in number, are changed by their experience. One of the first authors, Ebony Bolding, is a mother now. “And as her daughter grows up, one of the things she will see her mother as is an author,” says Himelstein. “And she will consider that to be among the jobs that are familiar to her family. I’m interested in the seeds that are sown by having these books exist.”

Philanthropist Jamie Schweser worked with a group of funders to support social-justice efforts in the Gulf region after Hurricane Katrina. In order to recruit more funders to the group, Schweser would give out NSP books as an illustration of the issues they were trying to address. “You can tell people, ‘Racism! Classism!’ But if I could just hand a funder a book by a kid about the block they grew up on, they could see, ‘These are people with stories like me.’” Though the group did not make grants to NSP, Schweser himself did fund them. For Schweser, the books were more than just a personal touch in a funding campaign, they’re a demonstration of a central principle of his: “There’s a false idea in philanthropy that philanthropists have what is needed, and we give it to people who need it. The truth is that we all have part of what’s needed. Stories help philanthropists connect with other people in other places and understand the value.”

Read an excerpt from Ebony Bolding’s book Before and After North
Dorgenois, in which she talks about how the city newspaper “twisted
our words” in its account of the shooting death of a high school student.