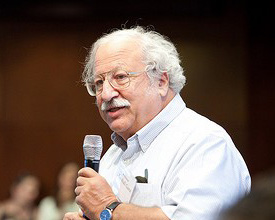 “I stand here knowing that my story is part of the larger American story.” That’s Barack Obama in his 2004 Democratic National Convention speech. No wonder that the speaker of these words, and the author of a thoughtful memoir, would have storytelling be a central part of his presidential campaign four years later. A template used for training of volunteer leadership teams in his 2008 campaign was devised by organizer and Harvard professor Marshall Ganz and was based on teams sharing the “story of self, the story of us, and the story of now.” Ganz now teaches the practice— which he calls Public Narrative— to civic associations, community organizations, and advocacy groups worldwide.

For social-justice activists, the New Organizing Institute (NOI) offers online tools and two-day trainings in Public Narrative. NOI has done customized trainings for such groups as J Street, the Truman National Security Project, Greenpeace, and Planned Parenthood. The Rappaport Family Foundation made a grant for NOI to train community-college students (and future activists) in California. “We’ve got the most progressive generation of community college students in decades,” says foundation vice president Catalina Ruiz-Healy. “We want to equip them to be lifelong activists. At NOI’s Public Narrative trainings, students learn leadership skills they’ll carry for a lifetime, and that means a high return on our investment.”

Trainees learn how to tell their own stories to motivate others to action, how to coach others in telling their stories, and how to apply stories in stump speeches, at house meetings, on social media, and in other settings. NOI draws heavily on Ganz’s frameworks in their trainings. In the following interview, Ganz discusses Public Narrative.

MARSHALL GANZ: “THE STORY OF SELF, US, AND NOW”

Marhsall Ganz is a senior lecturer in public policy at the Kennedy School of Government at Harvard University. He volunteered as a civil rights organizer in Mississippi, then in 1965 began a long tenure with Cesar Chavez and the United Farm Workers, where he became Director of Organizing. He completed his Ph.D. in sociology in 2000.

Your interest in storytelling goes way back.
I grew up in California. My father was a rabbi, my mother was a teacher, and so I grew up in a world of story. Being raised in the Jewish tradition introduces you to story from when you are very young. The Haggadah at the Passover seder is called “the story,” and the story is told as a response to four questions posed by the youngest person there. The whole deal is about telling the story so the next generation can learn it and interpret their own times in light of it. “Public Narrative is a way of translating values into the motivation for action. It is one of a triad of leadership skills engaging the hands (action), the head (strategy), and the heart (narrative).” —Marshall Ganz

How did this translate into your later work as an organizer?
When I got involved in organizing and the Civil Rights Movement and the United Farm Workers, again I found myself in the world of narrative in action. It became clear to me that there was this question of motivation that went along with the questions of strategy. Motivation—the sources of courage and solidarity and hope— was just as important as coming up with the right boycott target, because you couldn’t do one without the other. So I began to see that there was head-work and heart-work that were required for the hand-work to be done—the actual organizing. And it was also clear to me that a piece of that heart-work was done in the form of narrative interpretation of what we were doing, of who we were, of who other people were, and where we were going.

“Public Narrative is a way of
translating values into the
motivation for action. It is
one of a triad of leadership
skills engaging the hands
(action), the head (strategy),
and the heart (narrative).”
—Marshall Ganz

You taught a class on “Organizing” at the Kennedy School of Government. From that you developed a course on “Public Narrative,” which you began teaching in 2005. What were the underpinnings for it?
The course had these three components which for me went back to the questions of Rabbi Hillel, the first-century sage, which I’d learned about as a child: “If I am not for myself, who will be for me? If I am for myself alone, what am I? If not now, when?” That was the underlying framework to the story of self, the story of us, and the story of now. If you go back and read the account in Exodus about Moses and the burning bush, you will find the same three questions right there. And in Obama’s 2004 Democratic National Convention speech, sure enough, there they were in the first seven minutes. What I’ve backed into here is a deep structure of how storytelling works in a leadership setting.

What was the role of Public Narrative in the 2008 Obama campaign?
Public Narrative was used in campaign training camps, called “Camp Obamas,” and through that it became the basic template that the campaign used as a whole. Out of these two-day workshops would come leadership teams equipped to tell their stories, engage others, strategize, and all the rest of it. People would come to Camp Obama thinking that they were going to learn how to tell Barack’s story or how to become policy experts. And the first thing was to learn to tell your own story about why you are here, and you will then be able to engage others and their stories, and out of that will come the “story of us,” and out of that will come the motivation to deal with the challenge that we face now. People come thinking that they have a deficit and they are coming to a training to acquire assets they don’t have; they leave realizing they have within their life experience what they need to be able to make an impact in the world. It’s a very different kind of experience, and I think that’s why it was so energizing.

You’ve said there’s a difference between a community-organizing model and a nonprofit-service model. Is there a role for philanthropy in supporting Public Narrative?
One of the concerns I have is people using Public Narrative as a marketing device, because for me marketing is the opposite of movement building. Marketing is all about getting somebody to buy your thing, whatever it is. And movement building is all about enabling people to act on their thing and discern what their thing is by engaging with others. One of the unintended consequences of a lot of well-intentioned foundation support has been to sustain groups that wouldn’t exist without the foundation. The real challenge of community organizing is that the community sustain it. How do you invest in developing leadership but not in creating dependency of that leadership upon you?

Watch Marshall Ganz talk about values and strategy,
and coach members of the California School
Employees Association in Public Narrative.