How can nonprofits work with outside storytellers to create change? 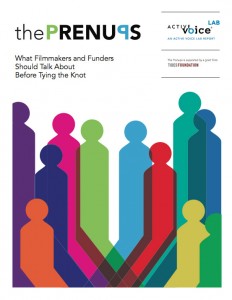 Sometimes you’ll decide the best way to tell stories for change is to work with an outside professional. Maybe you commission a documentary film or hire a storyteller-in-residence. This chapter is about how storytellers and nonprofits, funders, or activist groups can manage their relationships and have the biggest impact. Here, we talk mostly about films and filmmakers, but the same principles apply to other kinds of stories and storytellers, such as plays and playwrights.

Think about engagement and impact from the start.

Documentarians are skilled storytellers who care about the people and topics of their films, and they want to have an impact. And many nonprofits are on the lookout for high-quality media to get audiences involved. Good match, right? It can be an even better match—as far as social impact is concerned—if the two parties start talking early in the process. Filmmakers can learn about the issue from their nonprofit partners, find people to interview, and figure out how the organizations might use the completed film in order to move viewers to action. That all means bigger audiences and more impact.

Filmmakers and their nonprofit or foundation partners might work closely together throughout production, or they may have only occasional contact. Whatever the case, they can all benefit by talking about everything from the nitty-gritty to the big picture. Doing so helps both parties not only avoid trouble later on but also get inspired about what they might accomplish together. For questions to discuss, read “The Prenups: What Filmmakers and Funders Should Talk About Before Tying the Knot,” a project of Active Voice Lab. Sample questions include: What vision does each of us have for this project? What are our respective goals for the project, and our roles in it? What risks are we each assuming, and how can we mitigate them? What do we each want in terms of editorial control and input during the film? Who owns the copyright? “The Prenups” focuses on filmmaker-funder relationships but contains wisdom that any storytellers and nonprofits can learn from.

Prepare for things to change.

Creating a story is a process of discovery. That’s especially true in a documentary project about people whose lives change over the course of production. That fact may be unnerving for organizations that have a particular story in mind. But as one documentarian says in “The Prenups,” filmmakers know how to “ride the wave of discovery” and “tell a compelling story, even if we don’t have the script nailed down from day one.” And that’s a good thing, the filmmaker continues: A film needn’t follow a “party line” to have an impact. In fact, that may be the whole point: to follow the truth of the story wherever it leads. That will be more thought-provoking for some audiences than a story that hits them over the head with its message. Filmmakers and their partners can talk up front about what changes they can anticipate and how to deal with them.

For a film to spur action, it helps to give audiences a chance to get involved. That might take the form of post-film Q&As with the director, benefit screenings for nonprofits, discussion guides for community groups, DVDs or streaming video made available for house parties, or abbreviated versions or “modules” of the film that can be shown in high school or college classes. Who your audiences are and what you want them to do are guided by strategy. But one-off events or small-scale campaigns can also help, even if they’re last-minute.