What is Theatre of the Oppressed and how can we use it? 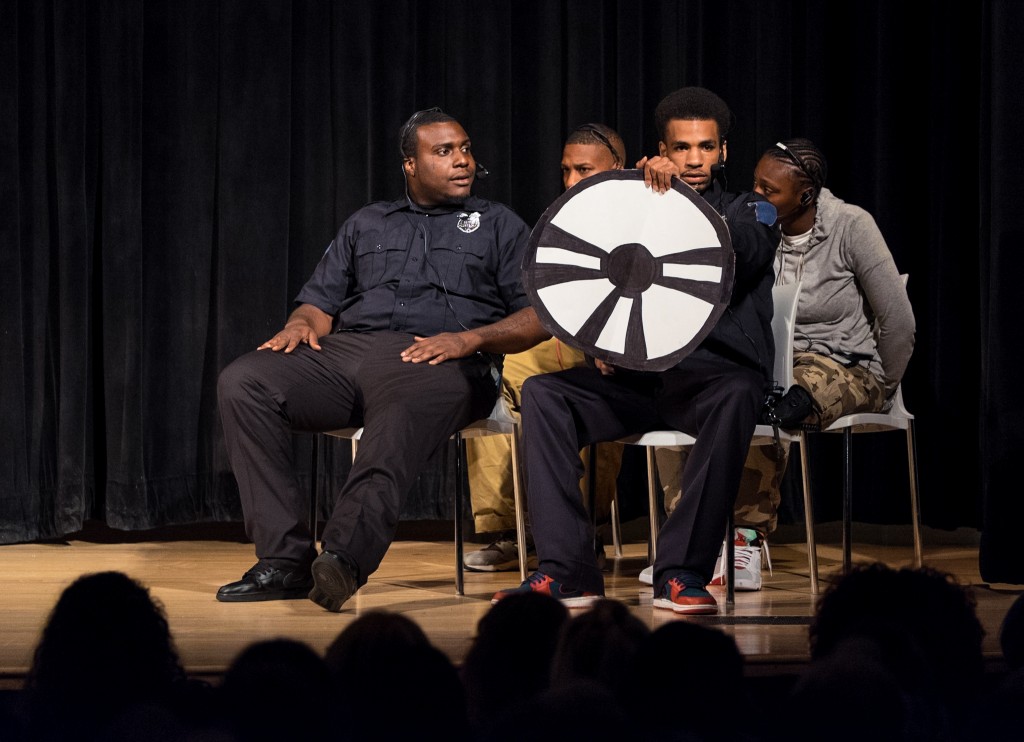 Scene: A woman in her apartment is beaten up by her boyfriend, then he leaves. Shortly thereafter, she hears a loud knock at the door and staggers over to open it. It’s the police, responding to a noise complaint from a neighbor. The woman lets the police in, only to have them see a syringe on the table, which is reason enough for them to check her ID. The police call the station and are told that the woman is a “man”—she’s actually a transgender woman, and she uses the syringe to inject hormones. The police ignore her bruises, ignore the real purpose of the syringe, and arrest her.

That was the premise of one of several short plays performed at a 2014 festival organized by Theatre of the Oppressed NYC (TONYC).

Each scene or short play performed at the festival is drawn from the real-life experiences of the actors themselves, among them homeless adults and LGBTQ youth from the group’s partner organizations.

“The theater itself is not revolutionary: it is a rehearsal for the revolution.”

After each scene ends, a TONYC facilitator invites audience members to the stage to take the protagonist’s place for a replay of the scene.

In the scene above, one audience member talks with the police at the door and does not let them in the apartment. Another audience member tries calling a trans advocate from a local organization to come videotape the interaction. In a given replay of the scene, the woman may still get arrested, but together the actors and audience have explored alternatives.

Having audience members jump onstage and enter the action is just one of various techniques in Theatre of the Oppressed, a set of methods developed by the Brazilian director Augusto Boal starting in the 1960s that’s now practiced by groups around the world (such as in Egypt, Tanzania, and Spain). TONYC is one of the most active practitioners of the method in the United States.

“We are all actors: being a citizen is not living in society, it is changing it,” said Boal, who died in 2009.

How a play is developed.

First, members of a group—say, a group of homeless LGBTQ youth—talk about the nature of human rights and what they as a group feel they need. Participants will then exchange stories about a time they were denied something they needed. In a group of homeless LGBTQ youth, the stories might be about when they were kicked out of their home by parents, harassed by police, or abused by a shelter worker.

In the course of telling and retelling, the group selects and may combine stories that most resonate with them to develop into a short play. For each play they create, the group outlines the story and figures out who the characters are—a son, his parents, maybe a sibling or a boyfriend.

Participants take on roles, and then, through a series of games, develop the play. In one game, the players improvise “interior monologues” about their point of view. In another game, called Opera, the actors play the scene with exaggerated emotions—happy, sad, angry, jealous—as they are called out by the “joker,” or facilitator. A similar game has people replay the parts of the scene in different genres—soap opera, detective movie, fairy tale. The “joker” facilitates discussion on what the games reveal about the characters, and then actors incorporate those revelations into the play.

Through this process, the group creates a short play of perhaps 10 minutes and is ready to perform it onstage and invite audience members—or “spect-actors,” in Theatre of the Oppressed parlance—to get involved.

How groups can use the Theatre of the Oppressed method.

The games used to develop a TONYC play help clarify the real drama of social-justice work. The group’s artistic director, Katy Rubin, says, “There’s a reason this is ‘theater of the oppressed’ and not ‘talking of the oppressed.’ A play gives you an emotional response, and that activates the audience to do something.”

Games and techniques can be used to warm up a group before a discussion, build group solidarity, prepare for an action, or attract new participants. It can also promote dialogue in communities in conflict. For example, the method has been used by Combatants for Peace, bringing together former Israeli soldiers and Palestinian combatants to resolve disagreements and advance a shared political platform.

The ultimate purpose of a TONYC play is not just to draw audiences in, Rubin says, but also “to make it impossible for them to leave” without feeling connected to the people and the problem dramatized onstage. “They will now always carry the problem with them as their own. They see how it relates to their lives.”