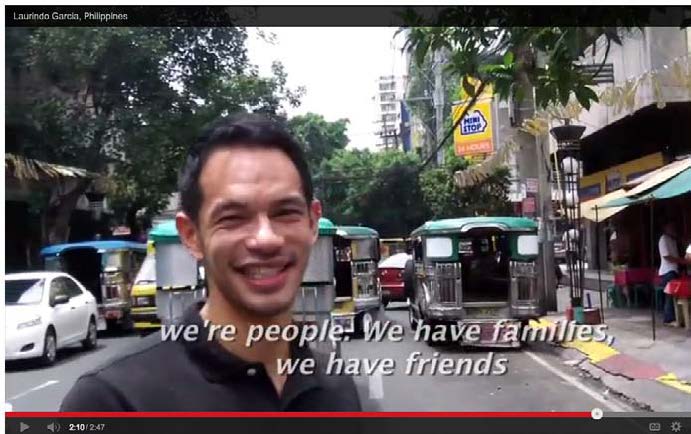 Stanislav “Stas” Tcaci is 15 years old and lives in Straseni, a village in Moldova. He studies geography, math, biology, English, and Romanian. “The only difference between me and other people,” he says in a short flip-cam video shot by his brother, his mother, and himself, “is that I have physical problems, and they don’t. But they may have other problems.” The video is part of a larger media campaign by Keystone Human Services International Moldova Association (KHSIMA), which advocates for the deinstitutionalization of people with intellectual disabilities. The campaign is funded in part by the Health Media Initiative of the Open Society Foundations Public Health Program.

“For the participants who tell their stories on video, it’s a lovely experience, and it’s challenging personally,” says Brett Davidson, director of the Health Media Initiative. “But that’s not the reason we’re doing it. The goal here is to support the advocacy effort.” KHSIMA advocates for people with disabilities by raising awareness, promoting rights, fighting discrimination and stigma, and supporting “self-advocacy.” A critical part of that effort is for people with intellectual disabilities to tell their own stories, for use in a media campaign and a film festival.

“The stories fit into an already existing strategy,” says Davidson. “Whether it’s to close the institution and reintegrate people back into regular schools, or change the government’s policies, or raise money for community housing.

We need to hear from these children and their families in order to boost these efforts.” For example, stories help allay teachers’ fears about integrating children with intellectual disabilities into the classroom, or they persuade policy makers by using emotional arguments.

“Simply presenting the
‘evidence’ will not bring
about change. You first
have to make people care
about the problem. And
that is what storytelling
does.”
—Brett Davidson

Moldovans with intellectual disabilities—or anyone else in programs funded by the Health Media Initiative—are not necessarily natural-born storytellers or videographers. In order to help grantees communicate effectively, Davidson contracted with two groups: a production company called Purple States that trained participants in producing video; and a group called Narativ, which trains people on how to listen and how to tell stories and envisions “a world connected through listening and sharing personal stories.”

“When you tell a story, you make yourself vulnerable,” explains Davidson. But self-empowerment is central to Narativ’s methodology. “People can make choices about what they do or don’t want to tell. Many people we work with are already very marginalized, so it’s very powerful when they come to feel that their story is as important as anyone else’s. They also help change the story that is told about them.” Purple States and Narativ have both worked with Health Media Initiative grantees worldwide.

Purple States produced stories for the Here I Am campaign to fight AIDS, tuberculosis and malaria. And Narativ had sex workers from South Africa produce “story cards” as part of the campaign by SWEAT, Sisonke, and others to decriminalize sex work in that country. In both campaigns, the aim is to get the voices of people most directly affected into the policy debate.

The Public Health Program, of which the Health Media Initiative is a part, “is not a traditional health program,” says Davidson. “We’re more of a human rights program that works in the area of health,” on issues such as access to essential medicines. The Health Media Initiative has a few of its own unique grantees but mostly provides technical assistance, training, and some media capacity-building grants to existing grantees in the various Public Health Program portfolios.

“We measure our success by the extent to which we are able to help grantees engage in strategic communication and media work—that is, start with strategy, and let strategy dictate their tools and tactics,” says Davidson. “Too often it starts the other way around.”

When storytelling is described as “powerful,” this often implies an emotional resonance. But in the Health Media Initiative’s work, it also points to political strength. “Storytelling is an empowering process in itself,” says Davidson, “and the stories that come out of it can be used to help change policy.”