How and why can we use humor? 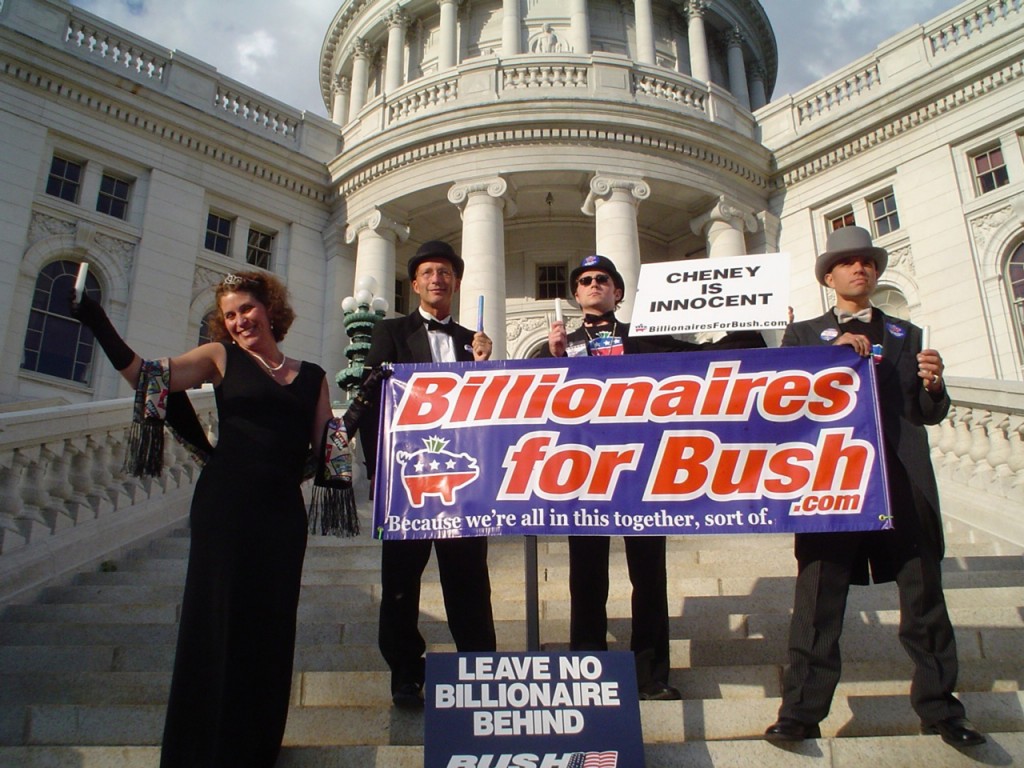 Our work is serious. That doesn’t mean we have to be serious all the time. Sometimes humor is just the thing to get people to pay attention to a pressing issue or see the absurdity of the status quo. Following are some notes about what humor does and what you can do with humor.

Against the assault of laughter, nothing stands. – Mark Twain

We make sense of our lives through stories. And, in a process that cognitive scientists call “confirmation bias,” we tend to dismiss new information that doesn’t fit with the story we already have of how the world works. But humor interferes with that bias by creating surprise. It also opens people up to drop their prejudices. That’s what happened when comedian Negin Farsad organized a tour of Muslim comics throughout the American South and Midwest, as documented in her film The Muslims Are Coming! A similar principle was at work when a group in Bucharest called ActiveWatch had Roma medical students go on public transit to play accordion and offer free medical visits; the students couldn’t play accordion to save their lives, so the outing challenged riders’ stereotypes of Roma people as beggars and buskers—and opened up the possibility that they could be health providers.

Creates a joyful experience and makes for good “optics.”

Activists lose a lot of battles. So it helps to add some joy to the proceedings. Andrew Boyd, an initiator of the satirical group Billionaires for Bush, says, “If you can make people laugh, then you’re giving them a gift. You’re not just saying ‘You should pay attention to this.’ It’s more like, ‘Let’s play together.’” Creative activism draws the attention of reporters and social-media users who have become tired of covering the same old rallies—to say nothing of a public that may be tired of hearing about them. “[Funny activists] are harder to shrug off as knee-jerk do-gooders,” says Medea Benjamin, a founder of the peace group CODEPINK. “And with humor, you don’t need a lot of people to make an impact. You can make a 10-person demo a successful event.” (Or fewer, as the Yes Men prove.)

Exposes the absurdity of the status quo.

If you’re going to tell people the truth, be funny or they’ll kill you. – Billy Wilder

In his classic satire A Modest Proposal, Jonathan Swift proposed that poor Irish families sell their children as food. This outrageous idea, delivered by an utterly serious narrator, led readers to grapple with the very real choices faced by these families. The Yes Men are among the greatest contemporary bearers of the Swiftian tradition, with pranks like mock-serious websites and unauthorized apologies issued on behalf of corporate polluters. Members of Billionaires for Bush dressed up as faux billionaires—wearing thrift-store fancy clothes and jewelry and assuming names like “Phil T. Rich” and “Anita Subsidy”—and went to rallies, speeches, and other public venues to proclaim their support for President George W. Bush during the 2004 election season. They’ve continued their antics since then. With signs reading “Corporations Are People Too” and “Leave No Billionaire Behind,” the group highlights the relationship of mutual back-scratching between billionaires and politicians in a way that more shrill polemics do not.

WHAT YOU CAN DO WITH HUMOR

Explore the comical aspects of your work.

Using the functions of humor described above, explore the comical aspects of your work. Deadly serious as your cause may be—human rights, extreme poverty, prisons—there is always a humorous aspect to it. The humor might not be in the injustice itself, such as rape, but it could be found in targeting rapists, satirizing the public dialogue about rape, or taking the logic of the injustice to its absurd extreme. Tina Fey and Amy Poehler, for example, told jokes at the 2015 Golden Globes that touched on several aspects of “rape culture.” And humor may subtly implicate the audience, make them acknowledge their complicity in the injustice at hand.

Make room for play and spontaneity.

There are no rules for how to be funny, but you can make room for people’s humor to emerge. As described in other chapters of this guide, try using improv theater games, creative-writing prompts, or art exercises to imagine a better future. You can do a one-off experiment with these or other methods, or build creativity into the practice and culture of your organization—allow staff to use a few percent of their work time to learn fun new ways of communicating, or set aside time in staff meetings to talk about the latest political comedy.

Draw on your network for humor.

In the run-up to the 2004 presidential election, the MoveOn.org voter fund sponsored a video contest called “Bush in 30 Seconds,” which invited people to submit short video ads about President Bush—there were some hilarious videos among the more than one thousand entries. Other groups have sponsored meme contests and open-mike comedy shows to tap the talent of their network.

Draw on the skills of professional comedians and clowns to help you figure out how to integrate humor into your cause. Hire a comedian-in-residence, get a humorist to write a series of funny blog posts, or ask a comedy-for-change group to consult on your work. Consider Stand Up Planet, a TV documentary and transmedia series hosted by Hasan Minhaj that showcases comics from the developing world who do socially relevant comedy (see also the project’s impact report). Comedian Lizz Winstead, a founder of The Daily Show and Air America Radio, also helped launch Lady Parts Justice, a “cabal of comics and writers” dedicated to protecting access to birth control and abortion. Many pros were involved in JJJ: Comedy for a Change, an international conference on the ability of comedy to drive social change.

But watch out for pitfalls.

Staying tuned to popular cultural forms is politically advantageous, but it threatens to devolve into folly, or worse. Humor may just act as a safety valve to let off social pressure, as Claudia Orenstein has written of clowning: “Small theatrical transgressions thus express, but at once defuse, brewing political unrest, perhaps even undermining the prospect of real and effective political action.” Medea Benjamin ticks off a list of other potential drawbacks to the use of humor in political organizing. “You can really offend people, you may be taken the wrong way, or people may not realize you’re trying to be funny. You can belittle the work you’re doing or the issue you’re working on.” Andrew Boyd, while he admits these and other possible downsides, maintains that there is nothing inherently limiting about the use of humor. The question is when and how to effectively deploy humor.