What is Public Narrative and how can we use it? 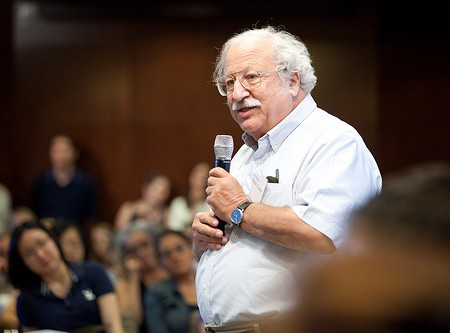 “I stand here knowing that my story is part of the larger American story.” That’s Barack Obama in his 2004 Democratic National Convention speech. No wonder that the speaker of these words, and the author of a thoughtful memoir, would have storytelling be a central part of his presidential campaign four years later.

Obama’s 2008 campaign volunteers would attend a gathering called Camp Obama. One of the things they learned there was a leadership-development practice called Public Narrative. The practice was developed by Marshall Ganz—a former longtime United Farm Workers organizer and now Harvard professor—and used as a template by the Obama campaign.

Public Narrative brings three stories together into one.

A story of self.

If I am not for myself, who will be for me? If I am for myself alone, what am I? If not now, when? – Rabbi Hillel, quoted by Marshall Ganz

A story of self is a personal story that Ganz says shows “why you were called to what you have been called to.” Everyone has a story about an experience that got him or her involved in a given cause. If the cause is improving local schools, maybe one person got involved because her kids are getting a poor education and have outdated textbooks. Someone else is a local store owner who sees schoolchildren every day when they come to buy snacks. The story of self communicates the teller’s values, whether it’s “opportunity for children” or “it takes a village.” The story of self presents a specific challenge the teller faced, the choice they made about how to deal with the challenge, and the outcome they experienced. Ganz says this story invites listeners to connect with the teller.

A story of us.

A story of us is a collective story that Ganz says illustrates the “shared purposes, goals, vision” of a community or organization. As with the story of self, the story of us focuses on a challenge, a choice, and an outcome. The story of us of a school-reform group might be, “Together, we are a community of local parents and residents who got into this work because we were fighting for our own kids’ educations in a failing school system—each of us wanted the best for our sons and daughters and neighbors. Then we found each other and realized the fight was bigger than just ‘my kid’—we realized that we needed each other to win this fight. And so we started this campaign.” The story of us, says Ganz, invites other people to be part of your community.

A story of now.

A story of now is about “the challenge this community now faces, the choices it must make, and the hope to which ‘we’ can aspire,” as Ganz puts it. “A ‘story of now’ is urgent, it is rooted in the values you celebrated in your story of self and us, and a contradiction to those values that requires action.” There is always some discrete and urgent challenge you can present to listeners. In the case of a school-reform group, the story of now might involve getting rid of a corrupt superintendent or pressing for more public funding for education. The story of now invites people to join you in taking hopeful action on the pressing challenge, Ganz says.

Linking the stories of self, us, and now.

Public Narrative links these three stories together into one. Each person has her own Public Narrative; your story of self is unique, and your stories of us and now are similar to others in your group, though you may express them in your own way. Your Public Narrative may change over time. You may learn how to express your story of self more clearly as you tell it repeatedly; the shifting makeup of your community may suggest a change in the story of us; or maybe the group takes on a new, urgent challenge that requires a different story of now. Ganz writes that you don’t produce a final “script” of your Public Narrative but rather learn a process “by which you can generate that narrative over and over and over again when, where, and how you need to.”

How to develop Public Narratives.

In gatherings led by Ganz and groups such as the Leading Change Network, people first learn about the theory behind Public Narrative. Participants spend time composing their own story of self then share it with others to get questions and feedback meant to zero in on the challenge, the choice, and the outcome in their stories. Storytellers may be asked questions such as what made their challenge a challenge or where they got the strength to make the choice they did. Other participants may give feedback, such as what images they found most vivid, what moments moved them, and how they understood the storyteller’s values. Once group members have heard one another’s stories of self, they are in a position to start creating a story of us and a story of now—using a similar process of individual writing, followed by group sharing and feedback.

A person can share her Public Narrative in any venue, from press releases to public events to social media. “By telling our personal stories of challenges we have faced, choices we have made, and what we learned from the outcomes, we can inspire others and share our own wisdom,” Ganz has written. “Because stories allow us to express our values not as abstract principles, but as lived experience, they have the power to move others.”