Where can we tell stories? 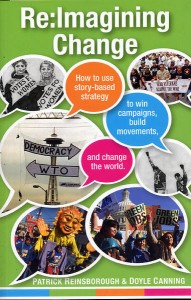 Credit: The Center for Story-based Strategy

When you’re fighting for change, you come up against raw power: people with money, corporations, armies, lobbyists, political posts, media outlets. People in power also have ideas, which they communicate in no small part through stories.

To counter those stories, we must first examine them, using a “narrative power analysis,” a term coined by Patrick Reinsborough of the Center for Story-based Strategy and former staffer Doyle Canning. They present the example of a neighborhood group fighting a commercial development. A “traditional power analysis” might identify decision-makers (e.g., city council) and the people who influence them (e.g. lobbyists, voters). A “narrative power analysis” would aim to reveal the ideas supporting the developers’ drive to build.

The currency of story is not truth, but meaning. – Patrick Reinsborough and Doyle Canning

So, the authors continue, if the developers’ narrative frame is “bringing jobs to the neighborhood,” then local activists might “organize those same small businesses that the developer claims to represent” or “organize a jobs fair to show that there are other ways to create employment.”

Social-change stories can be told in or about the places where the social problem is occurring. Canning and Reinsborough have identified five types of “points of intervention”—“specific places in a system where a targeted action can effectively interrupt the functioning of a system and open the way to change.” Those systems can be physical (such as a sweatshop) or ideological (racism).

Canning and Reinsborough say that the “five types of points of intervention are points of production (for instance, a factory), points of destruction (a logging road), points of consumption (a retail store), points of decision (a corporate headquarters) and points of assumption (a foundational narrative or a place of symbolic importance).”

Any of those points of intervention can be targeted with what we might call a “storytelling action,” such as doing street theater, distributing leaflets with printed stories, making speakers available to give their accounts to the press, or installing art that recasts a public space.