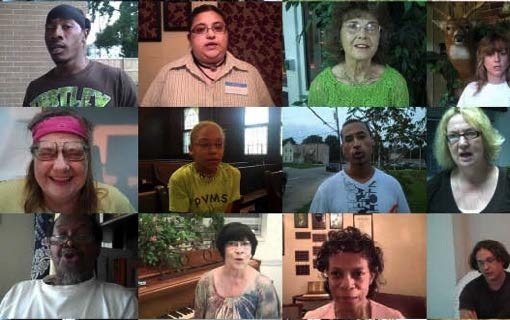 “Nearly everyone in America is connected to the criminal justice system, some more directly than others,” says Nick Szuberla. “When you talk with people, the stories emerge—maybe they have a loved one who is incarcerated, or they live in a prison town, or teach in a school where kids are racially profiled by police.”

Szuberla has been hearing those stories since 1998, when he started a weekly radio call-in show in the Kentucky coalfields for people to speak directly to their family and friends in the two super-max prisons within broadcast range of the station. Since then, he’s produced radio, film, and theater projects on the nation’s ever-growing population behind bars. His organization, Narrative Arts, has launched a project called Nation Inside, which partners with state and national campaigns on mass incarceration to marshal stories to push for policy change.

“Telling stories is not the first thing you’d think of to tackle this huge social problem. But it works,” Szuberla claims. For starters, the organization trains partner campaigns in using narrative. Training topics include how to conduct story circles, shoot video, and get compelling testimonials. “First off, it’s just plain fun to shoot a video on your phone, and post it online. People feel empowered, they see their voice really matters.” As people share their stories—at Nation Inside events or on its web platform— they make connections. “They’ll say, ‘Oh, you have a son in prison on drug charges too?’ And they’ll realize that it’s not just coincidence or bad luck that they’re in that state.

“Some people make
media about organizing,
and that’s great. But
increasingly, folks are
realizing that making
media is itself a form
of organizing.”
—Nick Szuberla

“The challenge is to link people’s personal stories to the national narrative about mass incarceration,” he continues. That story? The country has been locking up youth, adults, and immigrants at an ever-increasing rate—most of them poor, people of color, and nonviolent drug offenders—even as crime has decreased. “This system has been decades, or really centuries, in the making,” says Szuberla. “Social policy, racism, the profit motive have conspired to make the U.S. the world’s largest jailer. The big story is how we got to this place and how we’re going to get out of it.”

In order to connect people to one another and the larger story of incarceration, Nation Inside hosts a story-driven web platform for its partner campaigns. Each campaign gets its own site under the Nation Inside banner, with pages for stories, actions, press, and more. People who contribute stories to a campaign feel more invested in it. Campaigns learn from those stories about what policy agendas to pursue. Campaign managers get access to database and email tools that they can use to organize. Stories beget stories, and campaigns build momentum over time.

It’s not all easy going. “This is a personal and very painful issue for a lot of the people in the campaigns,” says Szuberla. “There are plenty of obstacles to telling or gathering stories.” Some people don’t know what to say; others are worried about retribution from the justice system; many are intimidated by video; and some campaigns think it takes too much time to gather stories. “At every point, we try to remove obstacles,” Szuberla explains. “Not all stories have to be public; sometimes it’s enough to tell your story to one person at a conference. We provide video, text, and phone options for people to share their experience. We hold national gatherings to exchange strategies.” Not least of all, the organization provides what Szuberla calls “pathways to action,” so that tellers don’t just air grievances but contribute to change. “This is an enormous issue,” he explains. “To keep people motivated, we celebrate the small victories.”

Nation Inside has attracted funding from beyond just the field of criminal justice. One such supporter is the Media Democracy Fund, which awards grants that “protect the public’s rights in the digital age.” “Digital policy—the policies that govern how people communicate— is tied to just about every issue you can think of,” says MDF director Helen Brunner, ticking off examples such as economic development, the environment, and human rights. “We want to broaden the base of people involved in digital policy,” she explains, which Nation Inside does by mobilizing constituencies such as people of color and low-income people. “And the Nation Inside platform facilitates the exchange of information and ideas. We want to support those structures because they enhance our democracy.”

Listen to a series of short testimonials about the high cost
of staying in touch with prisoners, part of the Campaign for
Prison Phone Justice on the Nation Inside platform.