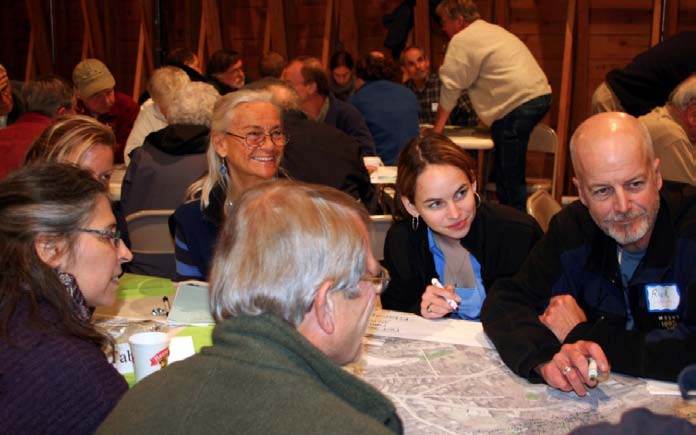 Damariscotta, Maine is a gorgeous little town of 2,000 people on the banks of a river that feeds into the Atlantic Ocean. There are about a dozen mom-and-pop oyster operations, a farmer’s market, a community theater, an independent bookshop, an old-fashioned Rexall drugstore.
Enter Walmart.

In 2005, the big-box retailer proposed to build an outlet just outside of downtown; in response, voters passed a ballot initiative in a special election limiting retail outlets to 35,000 square feet—smaller than the average Walmart. The crisis had passed, but a deeper problem remained. “Town residents realized that they knew what they wanted to say ‘no’ to, but not what they wanted to say ‘yes’ to,” says Betsy Rosenbluth. So town leaders hired a planner and formed the Damariscotta Planning Advisory Committee, with the goal of understanding what residents wanted for their town. The committee teamed up with the Orton Family Foundation, an operating foundation in Vermont, to use the foundation’s Heart & Soul Community Planning process. The four-step process leads participating towns through the steps of getting organized, exploring shared values, developing options for planning, and taking action.

“Every community has characteristics that can’t be reduced to budgets or statistics or ordinances,” says Rosenbluth, director of projects for the foundation. “Maybe it’s a local ice cream shop where you had your first date. Or maybe it’s the fact that people say hello to you on the street. Those things can be shared in the form of stories. And when people begin to share those stories, they get to know each other better, and they also develop a set of shared values about what they want for their town.” Both those things can create a strong basis for a community-driven planning process.
Orton trained a committee of Damariscotta residents in how to gather, share, and use stories. Committee members captured stories in one-on-one interviews and potluck story circles and at a story booth at the local library. One lifelong resident, Buzz Pinkham, told stories from his boyhood, jumping from ice block to ice block on the river and feeling safe having people always looking out for one another.

“Some stories are about
the past, and some are
about the future. We’re
interested in exploring
how stories can be used
to ‘choose your future’—
to evaluate alternative
visions and choices that
will drive community
decisions.”
—Betsy Rosenbluth

But how do such heartwarming anecdotes hold up against major developers who have the financial and political muscle to open new stores? “If community members have a shared vision that’s been developed democratically, then they can hold their leaders accountable and stand up to commercial pressure,” says Rosenbluth.
Those stories were combined with issue-specific workshops and a town survey to identify core community values, such as “having culture and nature in close proximity” and “living locally.” Idyllic as the values may be, the process of arriving at them was not without friction; conflicts arose over the importance of inviting businesses and creating jobs versus preserving the smalltown feel of the place. Those values were then incorporated into a design charrette to plan for growth in the town and eventually into the town’s comprehensive plan, which covers principles of growth, land use, and so on.

In Damariscotta, storytelling played a role primarily in building trust between old-timers and newcomers and identifying shared values and vision. Since then, however, the foundation has started to explore how a continuous stream of stories could help in later stages of project planning and implementation. Rosenbluth says that Orton also has been collaborating increasingly with community foundations in the areas where they work to ensure that a community’s values and outcomes are stewarded for the long term.

“The success of Orton is that people are still coming to the table,” says Mary Kate Reny, a business owner in Damariscotta. In other words, the town has built capacity to decide on a shared vision for the future of their community. Another resident, river advocate Steven Hufnagel, adds: “I would want in 50 years, 100 years, for oysters to grow and thrive in the Damariscotta River. That would be a test of our water quality, but it would also be a test of our planning.”