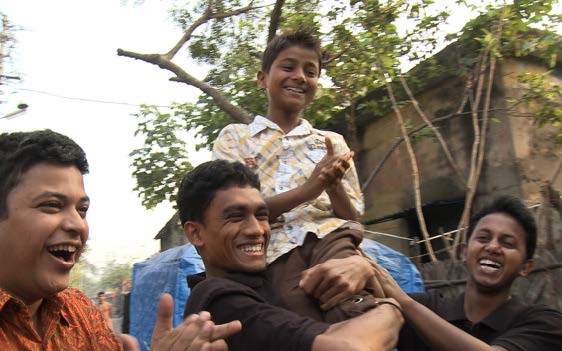 “We talk about investing in, connecting and celebrating social entrepreneurs, in order to have a large-scale impact on the world’s most pressing problems,” says Sandy Herz, the Skoll Foundation’s director of strategic alliances. “For us, celebrating is about storytelling, not about glorifying. It’s about engaging people in the larger narratives of the world we could and should be living in, and how we get from here to there.”

What better storytellers to team up with than the folks at the world-renowned Sundance Institute? Their collaborative five-year initiative, Stories of Change: Social Entrepreneurship in Focus Through Documentary, funds films about social entrepreneurship and convenes filmmakers and social entrepreneurs; the goal is “to create new possibilities in democratic practice and contemporary public thought.” Skoll provides the money, the portfolio of social entrepreneurs, and convening opportunities at the Skoll World Forum; and the film experts at Sundance provide the storytelling expertise, foster connections at the Sundance Film Festival, and handle the day-to-day operations of the initiative. The partners communicate frequently on strategy.

The partnership with Sundance is just one of the more recent incarnations of a foundation-wide focus on storytelling. Skoll has developed a range of partnerships that have resulted in radio, television, print, and film treatments of pressing social issues and the social entrepreneurs who address them. These include a book series in partnership with HarperCollins; the PBS broadcast of the program The New Heroes about social entrepreneurs; a series of short films about Skoll award recipients; and other partnerships with the PBS NewsHour, NPR, and BBC World.

“Most people need to see
before they can believe,
and nothing makes social
change more real than a
good story well told.” —
Sandy Herz

In the course of its storytelling work, Skoll developed the concept of a “funnel” of how a film can move audiences to progressively deeper action. In the case of the campaign around The New Heroes, the challenge was how to move people from the wide end of the funnel (seeing the program on PBS), to the middle section (attending any one of 1,600 house parties worldwide to watch the DVD), to the narrow end (at a house party, making a matched donation to the enterprises profiled in the film). Skoll learned from the New Heroes campaign that it hadn’t been able to create “a logical progression from seeing the show, to visiting the PBS website, to signing up for a house party, to making a donation,” says Herz. With that and other experiences, Skoll has learned to target audiences more precisely, determine outcomes for each point, and, where appropriate, to create the means for audiences to move more easily from the wide end of the funnel to the narrow end.

Skoll has carried these experiences into its Stories of Change work with the Sundance Institute. Cara Mertes, the director of the Documentary Film Program and Fund, says that foundations can be understandably nervous at times about funding media: “They should be asking questions before doing it.” Mertes says she works with filmmakers to plan their engagement strategies at the earliest stages of making the film, so that story and impact are tightly woven together. That’s something other grantmakers might consider too. “Funders like Sundance now give audience engagement grants at any time during the production cycle—potentially at the same time we give a grant to develop the film,” she explains. “Yes, there have to be some stringent filters, so you’re not supporting engagement on a film that will never get completed.” Still, she says, it’s critical to think about engagement and impact from the get-go.

All the better to get from here, where we are now, to “there,” the world we envision.

Watch clips from the Stories of Change film The Revolutionary Optimists,
about a social enterprise that empowers children in the slums of Kolkata
to better their communities.