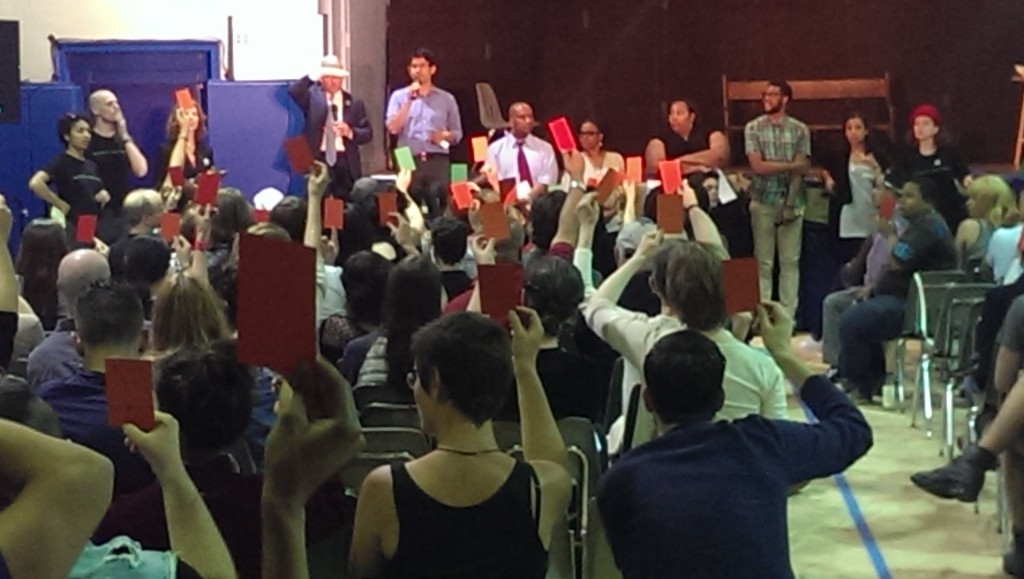 Theatre of the Oppressed NYC (TONYC) gave new meaning to “taking action” last weekend at “Can’t Get Right: Legislative Theatre Festival 2014.” At an event on Friday evening, acting troupes from three local organizations presented short plays, or scenes, based on their own experiences with the criminal justice system: racial profiling by the police, poor legal representation in court, and police entering the home of a trans woman who had just been abused, and arresting her. These mini-plays may sound like the theatrical equivalent of eating your vegetables, but they were full of humor and drama and outrage, so much so that you wanted to jump on stage and join in.

That’s just what Theatre of the Oppressed is all about, since no one is just a passive audience member, but a “spect-actor,” a participant in the drama of everyday justice. After each play, TONYC facilitators invited audience members to imagine what they might have done differently in the protagonist’s place — and to get up on stage and replay the scene with the other actors. With new information in hand about how each scene might unfold differently, audience members filled out index cards with ideas about how to correct the injustices they saw. Those ideas were then gathered and analyzed by a group of local, state and federal policymakers at the festival, who drafted 3 or 4 policy ideas to correct each injustice — a police abuse tip line, body-cams for police, a maximum caseload for public defenders, “know-your-rights” classes offered in high schools. Audience members then discussed and voted on those proposals with green (yes) or red (no) cards. Representatives from the New York City Council, the Mayor’s Office and the federal government committed to bringing the most popular proposals to their respective chambers.